Fans have discovered old transcripts of Travis Barker that detail his life with ex-wife Shanna Moakler and his decision to divorce.

The transcript shows a MySpace post from Barker that dates back to 2006, the same year he filed for divorce from Moakler. A fan on Reddit shared images of the post on the Kardashian-focused subreddit, r/KUTWK.

Barker begins the post by saying he’s never had his own blog or anything like it, preferring instead to express himself through his music. However, he felt it was important to “set the record straight” about his divorce.

The Blink-182 drummer breaks down a typical day in the couple’s life, which gives some insight into the root of their troubles.

He says he wakes up at 5:30 a.m. and takes care of their two babies soon after. Then at 7 a.m., his stepdaughter, Atiana, wakes up and he cooks her breakfast before Moakler’s assistant takes her to school.

He notes throughout the post that Moakler usually sleeps through this morning routine.

Later that morning the nanny arrives, he takes his son for a walk and drives to work while Moakler sleeps.

He then says that Moakler finally wakes up around 2 p.m. and immediately goes to get his nails done with his assistant. Barker says he’s been in the studio from 2 to 5, leaving only their nanny to care for their two youngest children.

When he returns at 6 p.m., he learns that Moakler is nowhere to be found when he and the children are having dinner.

“Shanna is MIA,” Barker said in all caps. “Note to self…she’s not at work.” She’s worked 6 times in the past 4 years, around 8pm I usually get a text saying she’s going out to dinner.

He then left to perform at a show, with his band. The nanny is still there when he comes home around 1 a.m., while Moakler is still not home. A few hours later, she finally comes home, but it’s not a happy occasion like it should be.

“Around 3:30 a.m. my wife walks in, drunk, swearing loudly because she hates my friends, hates my bands, hates my job, hates me,” Barker said. “I go to bed and repeat this every day, my breaking point.”

Travis Barker also accuses Shanna Moakler of cheating on him.

Barker explains that Moakler hadn’t told her some things she should have had. He said he heard from various sources that she was performing on Dancing With The Stars, posting family photos on MySpace and cheating on him, among other issues.

He concludes the post with an all-caps rant about how he tried to work things out with her, but to no avail. 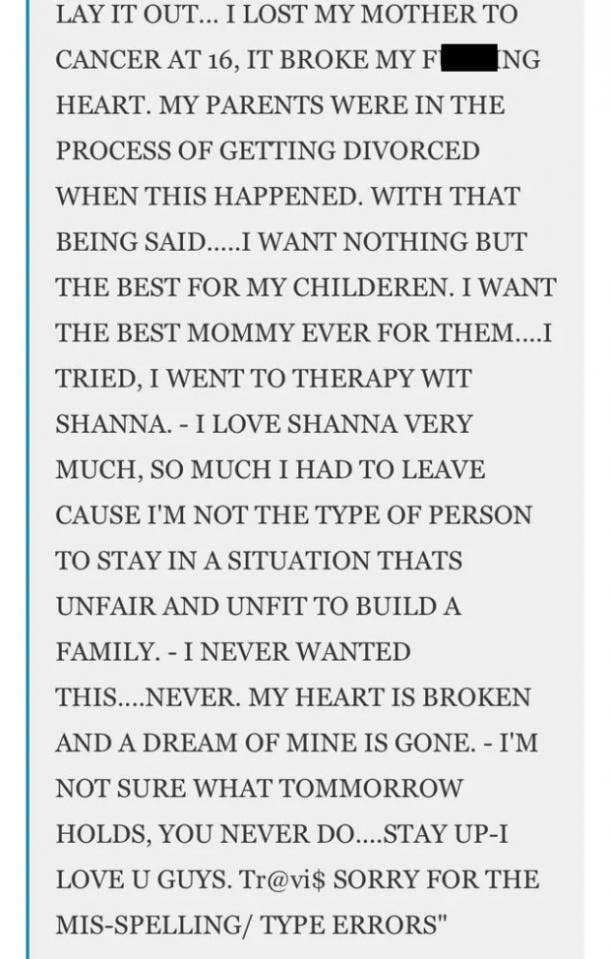 “I want nothing but the best for my kids,” Barker said. “I want the best mom ever for them… I tried, I went to therapy with Shanna. I love Shanna so much I had to leave because I’m not the type of person to stay in an unfair situation and unfit to start a family.

In the years since their divorce, Barker has started dating and recently married Kourtney Kardashian. Their two children, Landon, 18, and Alabama, 16, have publicly criticized their mother’s parenting.

More for you on YourTango:

Comment this story Comment Sen. Joe Manchin’s bargaining position has long frustrated the left, but on many crucial issues he was right and I defended him. So far. After persuading his Senate negotiating partners to support a budget reconciliation proposal that would cut the deficit, invest in US energy production and fight inflation, Manchin is […]

Did the US Army release a fake Lana Del Rey quote to boost recruiting?

The US military appears to have pulled a quote straight from the annals of inspirational Pinterest posts and for some reason attributed it to Lana Del Rey as part of what appears to be an effort to boost female recruitment. (Apologies for all the hypothetical coverage – but we’re all still completely confused too.) On […]

Where do homeowners pay the most property taxes?

Placeholder while loading article actions Soaring house prices naturally mean that tax assessments are also likely to rise. But tax assessments don’t exactly match home market values. Depending on the jurisdiction, tax assessments are reviewed annually or semi-annually and sometimes include discounts. In addition, the amount of tax paid varies according to the assessment of […]